It includes a roundtable and response to a piece by Julia Kristeva on “New Forms of Revolt” (open access):

Here’s an interesting piece–The Sound of the Police–in the Jacobin. It falls just a day after this strange op-ed by Steve Obsborne, a NY cop for 20 years and speaking about de Blasio’s supposed disrespect:

More police productivity has meant far less crime, but at a certain point New York began to feel like, yes, a police state, and the police don’t like it any more than you do. Tremendous successes were achieved in battling crime and making this city a much better place to live and work in and visit. But the time has probably come for the Police Department to ease up on the low-level “broken-windows” stuff while re-evaluating the impact it may or may not have on real, serious crime. No one will welcome this more than the average cop on the beat, who has been pressed to find crime where so much less of it exists.

Strange op-ed, since the police unions fought to keep stop-and-frisk, while Osborne basically admits that police have been making unnecessary arrests and nobody likes the status quo. And no mention, you know, of the deaths that are the center of the protests. In any case, let’s hope the work stoppage continues.

In case you were thinking, it’s been four days, where is my Žižek essay on the Charlie Hebdo massacre?

(Subscription needed), but as Open Geography notes below, responses to Stuart Elden’s The Birth of Territory are available. 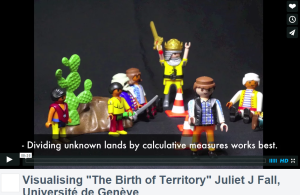 “Reading Stuart Elden’s The Birth of Territory” is now available at the Political Geography journal website. This is an “Author Meets the Critics” discussion forum, based on Stuart’s book, that was held at the Tampa 2014 AAG meetings, and includes contributions from Anssi Paasi, Juliet Fall, Alexander Murphy and Joe Bryan. Stuart also provides a response. The forum was organized by Claudio Minca and myself.

Innovatively, Juliet’s response is in the form of a stop-motion video (available here) in addition to her written contribution!

It’s a nice little piece at AUFS on the Euro and French anxieties that set Houellbecq’s novels in motion. This places well the author’s renowned contrarianism. It also might be a good time to ask if Houellbecq should join the list of authors whose novels are well known but nobody finishes even though they are not terribly long–I finished Les particules élémentaires but only because I had gotten far enough to drag myself through the rest. La carte et le territoire should have been up my alley given my interests, but I barely bothered entering that world before moving to another better book.

Stuart Elden has the set of links to the AUFS Foucault event.

The interview with Daniel Zamora at Jacobin, about his edited book Critiquer Foucault: Les années 1980 et la tentation néolibérale, has led to a number of commentaries.

‘An und für sich’ is hosting four pieces on this:

– Verena Erlenbusch – Neoliberalism and the Genealogy of Biopolitics

– Gordon Hull – Why Foucault is still useful on Neoliberalism

– Johanna Oksala – Never Mind Foucault: What Are the Right Questions for Us?

In addition, there is also a lively discussion following from the post I made in response to the Jacobin interview – much of it not to do with me, but dialogue between commentators. Other pieces are linked at Foucault News.

Stuart Elden interviews Michael Watts on Nigeria, political ecology, geographies of violence, and the history of the discipline at Society and Space.

Even though I was quite young at the time they were elected (Koch in the late 70s; Cuomo in 1982), these were certainly the two political giants while I was growing up. Yes there was Reagan in the background consciousness, but my father was a union shop stewart (years later, he and I would impress locals and take on the road our comedy team of radical academic and the conservative dad, so yes, he changed a lot–like much else) so the Daily News and Post and Newsday headlines were the stuff of my youth, since my dad, on my mom’s request, would always bring home the three major dailies. (Not to mention my 4th grade pretentious request to parents on, well, no budget, to get delivery of the NY Times, which they somehow managed to get and I dutifully carried to school each day, though it really helped most, I think, the kid in the desk next to me in 5th grade, who would copy the stuff on page 2, which was the summaries of news stories, for our current events assignments). Cuomo and Koch, both of whom died in the last year, lived and breathed New York. They were both God awful at certain or many times (Cuomo for the nationals was the voice of liberals and at home acceded to a legislature that was more conservative; Koch was unforgivable on race relations, among other things, but so was his constituency at the height of AIDS, the so-called crack epidemic, and so on). And yet after Mario Cuomo and Ed Koch, we got George (middle name Elmer, just to help you make the point) Pataki and Rudolph (9/11 came later) Giuliani and then Michael (where’s my next charity function?) Bloomberg, which was not just a blander politics–even if my first marches were against Pataki’s budget cuts to the State University of New York and I had to live through Giuliani’s wanna-be fascist bullying–but a less New York one. The punch of that time is gone, like a prize fighter just worn out at the end of a career. You could see that with Andrew Cuomo’s recent reelection: he won quite well in November but nobody seemed to care that he did. Bill de Blasio and the his tiff with NYC cops hopefully are a return to an earlier era; despite the handwringing articles, we need that. Let’s hope it stays and he fights back, rather than doing the usual of triangulating like each NY Democrat did after Clinton. New York should be a contentious place–warring against instead of copping the Democrats elsewhere. As I go home each year, that’s the New York I like to find. I’ll leave it with Cuomo on the death penalty:

Because the death penalty was so popular during the time I served as governor, I was often asked why I spoke out so forcefully against it although the voters very much favored it,”former Governor Cuomo wrote in 2011. “I tried to explain that I pushed this issue into the center of public dialogue because I believed the stakes went far beyond the death penalty itself. Capital punishment raises important questions about how, as a society, we view human beings. I believed as governor, and I still believe, that the practice and support for capital punishment is corrosive; that it is bad for a democratic citizenry and that it had to be objected to and so I did then, and I do now and will continue to for as long as it and I exist, because I believe we should be better than what we are in our weakest moments.

At amazon (h/t to Trigg on FB) for $.99. I’ve checked a couple of other Zero Books and they’re reasonable ($7.99 or so), but I’ll post if I happen to find anything with Zero that’s virtually free like this. Anyway, Trigg’s always interesting (his use of phenomenology is always well written and compelling) so it’s worth a download if you have a kindle or the kindle app on some device.