This is I think the longest response of any I’ve seen in the US to the UN Golstone report released last week on the Israeli activities in Gaza. It is, alas, as critical as anything you’ll see in an American newspaper. The whole article follows on from the questions the report doesn’t ask. The mind reels:

When does negligence become recklessness, and when does recklessness slip into wanton callousness, and then into deliberate disregard for innocent human life?

But that is the point — and it should have been the focus of the investigation. Judge Goldstone’s real mandate was, or should have been, to bring Israel to confront this fundamental question, a question inherent in the waging of war by all civilized societies against irregular armed groups. Are widespread civilian casualties inevitable when a modern army pounds terrorist targets in a heavily populated area with purportedly smart ordnance? Are they acceptable? Does the enemy’s deployment in the heart of the civilian area shift the line between right and wrong, in morality and in law? 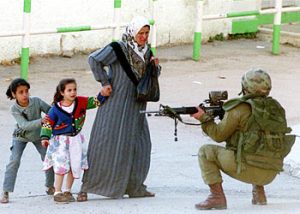 Goldstone Report: Who knew it was supposed to facilitate just war discussions?

These were precisely the questions that Israeli politicians and generals wrestled with in Gaza, as others do today in Afghanistan. It is possible, and certainly arguable, that the Israeli policymakers, or individual Israeli field commanders in isolated instances, pushed the line out too far.

But Judge Goldstone has thwarted any such honest debate — within Israel or concerning Israel. His fundamental premise, that the Israelis went after civilians, shut down the argument before it began.

None of this is news, of course, but this is ridiculous in the extreme. Should not op-ed writers be made to read the reports they cite? Goldstone’s report is valuable for raising exactly these questions—and answering them. These are not open questions. These are settled aspects of international law. If you want to have that debate, go ahead. If Israelis want to have that debate, let them. In fact, they did not need this report to have this debate and what’s mysterious about the whole conceit of this editorial is to claim that Goldstone’s report “should have been” about producing an internal debate in Israel. Just let that wander around the mind for a minute: the death, starvation, and mass internment of Palestineans is still for this author a matter of internal debate in Israel—a debate, by the way, that is ongoing and far more livelier than in the US.  UN reports are not there to open debate, but to help settle them. And there is no debate in this Op-Ed about these facts, unless suggesting that the report prove the unprovable is really taking issue with it. I mean, no one can prove intentions more than detailing minutely and patiently sets of facts that would result from such supposed intentions.

But according to this Op-Ed, this isn’t what the Goldstone report should do. No, by condemning this activity, by patiently setting out what every NGO that has looked into the same set of facts has agreed, Goldstone has “thwarted …honest debate.” If such a debate can’t begin with the set of facts that he lays out, how pray tell, could it be “honest”? You can deny this report only by deliberately responding to the set of fact it displaying, not by suggesting that it was not supposed to make any factual claims, but merely start a philosophical conversation on just war theory—a debate that outside of this context finds generally agreed answers. Because for the Palestineans, it matters little whether there is “deliberate disregard for innocent human life” or simply “disregard for innocent human life.” And isn’t that enough to condemn it? Or is this really about keeping a debate going on in Israel while the lives it takes in its untenable apartheid structure (one ultimately destructive to the Israeli state) continue to mount? These are great questions for a philosophy class. For a UN report, not so much.